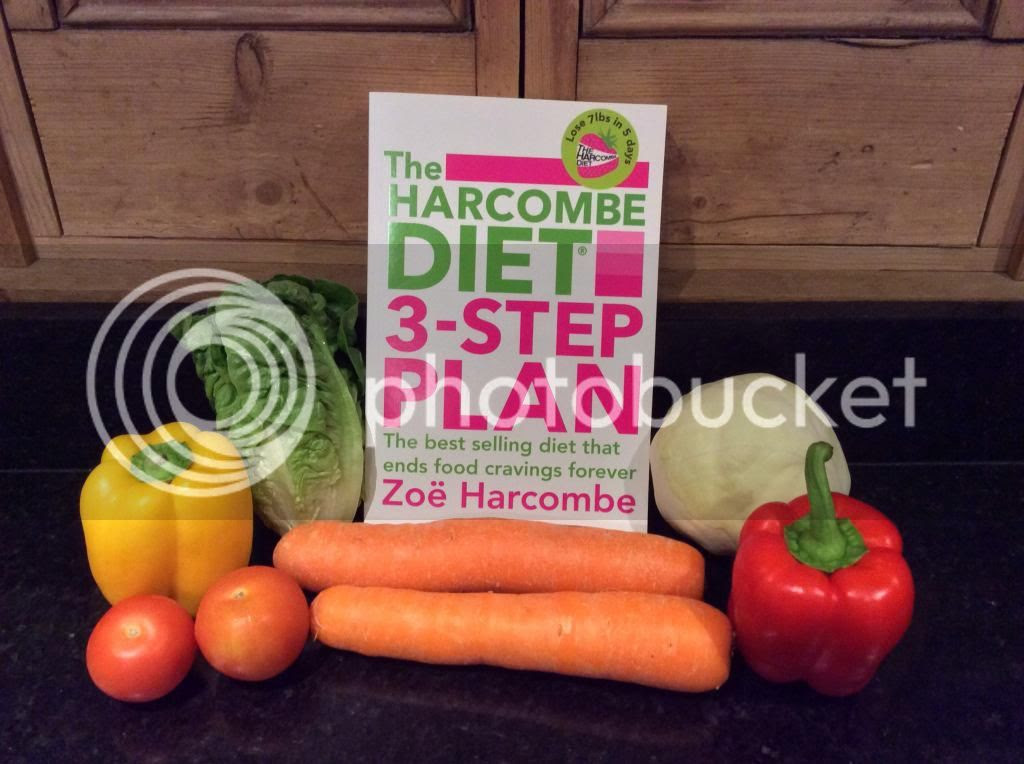 Well today is a non beauty related post but relates to diet.
Have you ever heard of The Harcombe Diet?  No?  Neither had I until December last year.

I'd heard of (and tried) most of the other diets - Weight Watchers, Slimming World, calorie counting, Rosemary Conley, South Beach, Dukan.  Yes, I am a lifelong dieter.  How I rue the day when, aged 20, I joined a slimming club in order to lose a stone.  Ironically my starting weight back then is my goal weight now!  I was put on a strict 1000 calorie a day diet and of course I lost weight.  Who wouldn't? Obviously I didn't know back then that I was starving my body on so little calories. I reached my goal quite quickly but it was unsustainable, old habits soon crept back in and my weight crept up, plus more.  And there started my life of yo-yo dieting.  From the age of 20 until now, almost 44 (eek, where did the time go?) I have ranged in size from an 8 to a 14 (16 if I wore trousers, so I never did!).  Now a 14/16 might not seem big but at only 5 foot 1 and a half (hey the half counts!) it just tipped me into the obese category - although to be honest I no longer take the BMI charts as gospel.

I have never had a problem losing the weight but keeping it off is a different matter.  All the other diets I tried, for me, just weren't a long term way of eating - more a means of losing weight.  They never addressed my eating issues so as soon as I stopped whichever diet I was on, back came the sugar monster and with it my cravings and so the vicious cycle began again.

Fast forward to just before Christmas 2013 and I was the biggest I'd ever been. I am ashamed to say, I weighed the same as I did when I was almost nine months pregnant with my first son!  I had 3 skirts which fit me and even my "fat" skirt was getting tight.  I had a wardrobe full of clothes that I couldn't  fit into. I felt fat and frumpy. I ordered Zoe Harcombe's book  The Harcombe Diet 3-Step Plan after I read about it on a non diet related forum.  Prior to that I had never heard of this plan.  The reviews on Amazon seemed promising so I clicked add to basket and the book arrived a couple of days after Christmas. I couldn't wait to get reading, especially after the excess of the festive season.

As I began turning page after page, I had my "light bulb" moment!  This is me Zoe is talking about.  All the things I had put down to lack of willpower over the years weren't just due to that but I realised were due to Hypoglycaemia and Food Intolerances.  Another common problem with over eaters is Candida but I didn't think I had that so crossed that off the checklist Zoe provides in her book. (How wrong I was but more of that later!). I always thought I was a chocoholic, I rarely went a day without it.  If I was dieting and stopped eating it, I could manage but I could never just have a small taste - one bar led to another... I really believed I was addicted.  Now I realise I wasn't addicted to chocolate but to the sugar in the chocolate.  I am a sugar addict or should say, fingers crossed, I WAS a sugar addict.

Phase 1 is the hardest but only lasts 5 days (or more if you wish). It is the detox part of the diet.  You have to cut out ALL caffeine, sugar, bread, pasta, potatoes, artificial sweeteners, cereals.  It is hard, I am not going to lie, but hey it's 5 days! You may get bad withdrawal symptoms - I did.  I think the more addicted you are to these foods then the more symptoms you have.  My symptoms included bad headaches, flu like symptoms and very heavy legs.  I also craved my sugar fix for the first 3 days. I think the headaches were mainly down to my Pepsi Max addiction but going cold turkey was the only way.  I only drank decaffeinated green tea or water.  For me, day 2 was the worst and I did end up going to bed with a migraine in the afternoon. Day 3 I still had a headache but it was easing and by Day 4 they had gone and the cravings were reducing.  I was still in the habit of eating between meals so if I felt a bit peckish, I would eat a hard boiled egg just to get me through until my next proper meal.
I was eating bacon and/or eggs with tomato fried in butter or olive oil for breakfast (I did try porridge with water but it wasn't for me), ham/egg/chicken/salmon/tuna salad for lunch with a virgin olive oil dressing or a homemade mayonnaise.  (Steer clear of shop bought as they contain sugar!).  Then for my evening meal I'd have a chicken stir fry, meat and veg (no potatoes) and I even had my Sunday roast, minus the roast potatoes but had roast parsnips instead and made a gravy made out of the meat juices.  I realised by Day 4 that I was actually enjoying my food again.  After the 5 days I weighed myself and I'd lost 6lbs.  I was pleased but I knew most of that was due to water weight and that Phase 2 was where the real weight loss began.

Because I was still having a few cravings, nothing major, but I wanted to ensure they had gone fully, I decided to stay on Phase 1 for a bit longer.  I was enjoying my food and I was finding it easy and I didn't feel deprived.  I am glad I stayed on it as a day or two later I started getting Candida symptoms.  I won't go into details but you ladies will know what I mean!  I'd not had these for over 10 years so I can only assume it was somehow lying dormant in me and when it had no sugar to feed on it came out fighting. (Don't know if that is even possible, but that's my non medically trained theory!).  Anyway, I soon killed that off with my new diet and an over the counter tablet for good measure.

It is recommended when starting Phase 2 that you slowly reintroduce foods so that you can see if you are intolerant to them.  The book says that any foods that you are desperate to reintroduce are most likely the very foods you are intolerant to.  For me that ruled out bread.  I LOVE bread.  Ho hum. I decided to reintroduce cheese first as I felt that was most versatile in terms of cooking meals.  You have to monitor yourself and note any symptoms returning such as headaches or weight gain or weight stall.  Well I didn't get any headaches from it so on weigh in day I trepidatiously stepped on the scales praying there wouldn't be a weight gain and was so relieved to find I had lost weight. I was thrilled. I could eat cheese on my diet. Obviously, I couldn't start eating tons of cheese but I felt I didn't need to anyway. Just a grating on my salad felt sublime.

The following week I decided to introduce cream. I don't really like milk and I don't drink tea or coffee so I wasn't missing it. I know most people reintroduce milk first in Phase 2 so they can have it in their cuppa but I didn't need it.  Again I chose cream so that it would help me in my cooking.  I made a lovely crustless quiche and again no headaches or upset tum and again I lost weight.  I was eating cheese, cream and butter yet still losing weight!  I didn't feel hungry between meals so I rarely snacked and if I did it was a slice of ham or an egg.  Last Sunday it got to 4pm before I realised I'd missed my lunch!  This is a huge deal for me, as I am usually a clock watcher and eat because it is time for breakfast, lunch or dinner. I missed it because I simply wasn't hungry.

In Phase 2 you can eat either fat meals or carb meals - you cannot mix the two. For example, if you want rice you can have it but because it is a carb you cannot eat it with fat (ie meat) so you could make something like a veg curry and rice as a carb meal.  If you were having a fat meal, eg Bolognese sauce made with steak mince, then you cannot have spaghetti with it as that is a carb.  I have mine with spaghetti squash, a vegetable.  Okay it isn't pasta but there are compromises to be made.  Pasta always bloated me and gave me wind yet still I loved it - I still do, but I'm learning to live without it.  I have been sticking to fat meals for Phase 2, mainly because it is easier for me to cook the same food for my family, although my portion is minus the potatoes, rice, pasta.  I also find fat meals fill me up for longer.
I won't go into all my meals here as I feel I have waffled on enough already, but let me know in the comments if you want me to do a post on my adapted meals.

This week I added frozen berries to my diet.  Blended a handful with some cream for a sort of ice cream type dessert.  Mmmm...

Phase 3 is the last part of the diet for once you've lost all the weight.  I can't tell you about that as I've 2 stone still to lose before I get there but hopefully once I do, I will post about it here.  I really feel my eating habits have changed and I feel this is a diet that I can sustain for the rest of my life (famous last words, but I really do think this is not another fad diet for me).

I have no affiliation with The Harcombe Diet, other than being a happy dieter. Cutting sugar out of my life is the best thing I have done in a long time. Besides the weight loss, now at 19lbs, I've lost 3 inches from my waist and my skin has never looked better.  See what Caroline Hirons says about the effect of sugar on your skin.  Sugar is in so many foods.  I have had to ditch my usual pre-packed ham because it contains sugar!  Why is there sugar in ham???  Same goes for bacon.  Luckily there are brands that don't contain sugar so I buy those now. Check your food labels. I bet you will be as surprised as I was as to where they sneak in this white stuff.

The book I read is available on Amazon but Zoe has written several so, if you feel like taking the plunge, choose the one that you feels suits you the best. There is also a Harcombe Diet website with more in depth information from Zoe.  Zoe is the expert, my blog post just informs you of my experience on this diet.

I was a sugar addict.  It has been 55 days* since I last had sugar and it feels good!

*disclaimer* (I did have 1 cheat a couple of weeks ago of 1 homemade choc chip cookie and the side effects I had -  headaches, lethargy, tummy pains, diarrhoea for one and a half days - will prevent me from cheating again!)

Enjoy the rest of your day.
Take care,
CJ xx
Posted by Beautyat40andbeyond at 08:10

Thank you for taking the time read my blog and I would love to read your comments.